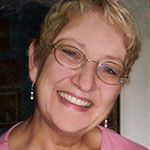 On October 7, 2015, my Mum, Lauranne Byrne, became one of seven women in Australia who die of breast cancer every day. I want to put an absolutely beautiful face to the statistic to inspire women who, like me, are overwhelmed and frightened, to be more like her: positive and courageous, intelligent and strong, right to the end. She knew her body so well, she knew herself so well. She was always vigilant and aware of what was happening to her and determined to be in control, to do everything in her power to overcome her health issues. She battled them with vitamins and minerals and healthy eating, with (albeit moderate) exercise, with enthusiasm and optimism and with her unwavering faith in a loving God. She always ate the 'right' things and stayed away from the 'wrong' things. Even guilty indulgences were kept at moderation. She was the poster child for health and wellbeing − except she had breast cancer.

My mother was 51 when she was diagnosed with breast cancer. She took the diagnosis in her stride with grace and optimism. She had a mastectomy and underwent chemotherapy. She had the ability to make the best of any situation and meet every hurdle with a beautiful smile and a sense of humour. She harnessed her own pain and struggle and used it to support, educate and inspire other people struggling with illness and grief. She became an integral part of the many breast cancer awareness campaigns within the Great Lakes and Manning Valley community. For four years she lived in the positive assurance that cancer was behind her. She was a pillar of strength for other women diagnosed with breast cancer, as they were for her.

When she was 55 she was told the breast cancer had metastasised and spread to small pockets in her lungs, liver and sternum which the doctors would treat with chemotherapy. They had also found a tumour in her brain which they were to operate on and treat further with radiation. Throughout the surgery, even after recovering from brain surgery and undergoing radiation and chemotherapy, her smile never wavered. Her optimism waged war and as the odds continually stacked against her, she kept climbing above them, until she was standing valiantly on top of it all. At 57 she was diagnosed with yet another brain tumour as a result of the breast cancer.

Faced with her situation I would have cashed in my chips long ago. I would have been locked in a padded room screaming all sorts of profanities and questioning, 'Why me?' I'd be feeling completely forsaken. Surely I'd had my share, surely it was someone else's turn? But Mum wouldn't wish it on anyone. She showed us how to live with cancer without complaint, she showed us how to fight against all the side effects of the treatment which began making her sicker than the cancer itself. At 60 she walked from Tuncurry to Cape Hawke Surf Club to raise money and awareness for breast cancer. She walked even though it pained her; she walked even though she was supposed to be resting in preparation for a hip replacement because the radiation had destroyed her joints. She walked for the women who couldn't, she walked for the friends she had lost to the disease she was fighting.

At 61, with a new lease on life after her hip replacement, she underwent surgery to address a tumour on her spine. The surgery was a success but she would never walk again. With her usual resounding determination and optimism, she disregarded the doctor's diagnosis, talked of dancing at weddings, and believed she would once again prove them wrong and walk again. And as she had proved them wrong repeatedly, the doctors shared that hope. Still in hospital recovering from spinal surgery, the cancer had spread to the lymphatic glands in my mother's groin. There was nothing doctors and nurses could do but manage the pain, and my beautiful mother's final days were filled with strength, love and laughter. For ten years breast cancer had thrown everything it could at her but still it could not beat her. Still her love, strength and optimism radiated from her, and the darkness stood no chance. As she said, “I may die from breast cancer but it will never kill me.”

My mother always remained strong in her Catholic faith and in her commitment to her parish of Forster Tuncurry. Throughout her suffering she was aware of being accompanied by Jesus and particularly by his mother, Mary. She always reminded us of the “coincidence” that she was diagnosed with breast cancer on 15 August, the feast of Mary’s Assumption; she underwent her mastectomy on 22 August, the Queenship of Mary and she began her chemotherapy treatment on 8 September, the Nativity of Mary. It was fitting then that she died on 7 October, the day dedicated to Our Lady of the Rosary. On that final day, as she struggled for breath, our family held hands and recited a decade of the rosary. As we finished praying her eyes opened and she stared into space. Whatever she saw gave her great peace and enabled her breathing to soften, slow and finally stop as she let go of this life. Jesus, or perhaps his mother, had come to take her home.

Although her peaceful departure has assisted in my grief, the somewhat shameful truth is that I didn't think a tragedy like this would ever happen to me. Even after witnessing everything my mother went through, part of me, away from reason and logic and medicine, still couldn't comprehend reality without her. Part of me still believed in a way out where we all lived happily and healthily ever after. I thought tragedy was a fate for someone other than me. I thought a tragedy like this would just be something I'd read about, or hear about, not something I would actually live. What a shameful truth to acknowledge, what a selfish feeling to admit, especially as I wasn't the one living it, I was watching someone I love live it. It continues to feel so surreal; is this really happening to me? I guess we're at the shock stage of grief; the answer in my head in my mother's American accent tells me, 'Yeah, so what? Get over it!' She would never trivialise my grief but she would accept the deal she was given, look for ways to heal and encourage me to do the same. What's the alternative? Lock myself away in a dark room cursing the world for its cruelty?

I guess in order to heal I have to acknowledge the pain in the first place, hence this little exercise. Perhaps instead of fearing a future without my mother, I should praise the past and be grateful for the time we were fortunate enough to have. So here's to you, dearest reader, chin up buddy, the world is pretty wonderful, even when it isn't.