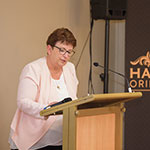 Grief to Grace National Coordinator, Anne Sherston, said the program is a four to five day retreat specifically designed for survivors of abuse, including physical, sexual, emotional, financial, spiritual or other forms of traumatic abuse, extending to domestic violence, institutional abuse and clergy abuse. Grief to Grace Ministries will eventually offer a five day ‘psychological and spiritual,’ live-in, retreat to provide victims of all types of abuse with a safe place to talk and work through their struggles. “When we are hurting so deeply and without reconciliation, we will continue to feel anger and grief connected to those unhealed wounds,” Mrs Sherston said. “Abuse doesn’t just happen and then it’s gone, it is something that we have probably suppressed, and unfortunately for a long time affects our lives in the way we feel when we act out through anger, shame, hurt or guilt. Most of the time we don’t know why we act out in certain ways which then causes us more grief.”

The retreat combines scripture, journaling, group activity and discussion, therapeutic facilitation, cognitive restructuring and grief work. “It’s a pilgrimage to discover the love, tenderness, belonging, safety, joy and peace that are often missing from the stories of abuse victims,” Mrs Sherston said. “Being able to forgive can only come through God’s grace and by doing so, we are unbound from anger, hatred, fear and frustration. To forgive is our choice. If we can forgive, it reminds us that God is present in that moment and it’s God that carries us through.”

Mrs Sherston said it was important for people in Australia to have more affordable access to the Grief to Grace Retreat program, which was open to anyone who had suffered abuse. “[At this stage] if someone wanted to attend a Grief to Grace retreat they would have to go overseas, so it is logical that we bring it to Australia to make it more affordable for those who need this help,” she said.