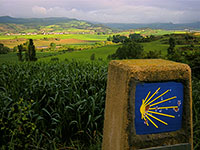 While many films have the highest human values at their core, many discerning Christian film watchers are also looking for films that could described as Christian films.

Some argue that contemporary films could only rarely be described as Christian films, but, as you will soon see there are many films that explicitly explore Christian themes and ideas, have a strong focus on spirituality, on good or evil, and metaphysics. Some of these Christian films also focus on people whose Christian faith enabled them to live an extraordinary life, undertake a journey or pilgrimage to a holy place, and to live and die for a fiath that does justice.

For many Christians the cinema is now the modern market place where, often, minds, hearts and values are won and lost. I hope this website will explore the relationship between Christian life and the contemporary cinema, and provide an applied method for analysing, engaging with and criticising films as they attempt to explore, reinterpret or undermine Christian theology. When it comes to the Christian films you have seen before, may these reflections help you see the movie afresh, offering a creative reading of the text, essentially, discovering where Christ is already active within our culture.

The best films are simple and direct communications telling the most human of tales, often with a profound message. Whether we like it or not, the cinema is the place where an increasing number of people encounter a world of otherness, ethical systems, personal and social mythologies which transcend the everyday. Within the cinema we can contemplate our place in a larger frame of reference where physical laws count for less and a relationship with a metaphysical and, often, a meta-ethical world, is taken seriously. Either in the short or long term this leads us to a new consciousness of our surroundings, ideologies and moral imperatives. As Margaret Miles rightly argues in her book, Seeing and Believing: Religion and Values in the Movies, "... the development of popular film coincided historically and geographically with the emancipation of public life from church control and patronage. "Congregations" became "audiences" as film created a new public sphere in which, under the guise of "entertainment" values are formulated, circulated, resisted, and negotiated. The public sphere is an arena in which various overlapping minorities can converse, contest and negotiate, forming temporary coalitions." (Miles: 1996:25)

May these Christian themed movies confirm you in your faith and inspire you to life faith, hope and love even more generously.

Rev Dr Richard Leonard SJ is the director of the Australian Catholic Office for Film & Broadcasting and the author of: Movies that Matter: Reading Film Through the Lens of Faith; and The Mystical Gaze of the Cinema.