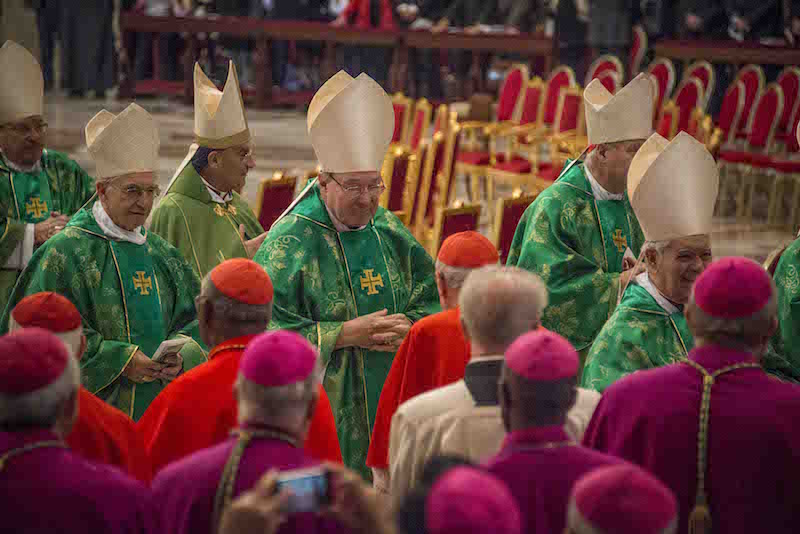 "The Synod journey is far from over; in some ways an important new phase is only beginning. But we are much better equipped ... this doesn't mean we have a detailed road-map; but Abrahamic journeys never do. They require instead a listening of another and deeper kind."

Into St Peter's we marched yesterday to close the Synod that had opened three weeks ago. It seemed like three months. When I made it to my place and sat down, I felt a fatigue come over me – probably the let-down after the intensity and sheer hard work of the Synod journey. Then I felt a tap on my shoulder, thinking it was either my guardian angel or an MC telling me I was in the wrong place. But no: it was the Australian Ambassador to the Holy See who'd been sitting in the front row in all his finery and then saw me take my place. He needed to speak with me. Under Pope Francis, it seems, diplomatic formalities aren't what they used to be. No one stays in their proper place any more. All these surprises can be exhausting.

There have been a thousand different accounts of how the Synod ended and what it all means. They range from the absurd to the insightful via the ideological and bland. Many of them view the Synod through a political lens and ask who won and who lost; they count the numbers. That there were politics is hardly news; it was there for all to see, especially for us inside the Synod. But what was equally clear by the end was that there was more than politics to the process; there really was "something greater than Solomon". This was patent at the very end when Pope Francis spoke, leaving us with the sense that this wasn't just Jorge Bergoglio but Peter speaking to the brothers and sisters. Here was "something greater". So too with the homily during yesterday's Mass, delivered in a low-key, almost gentle tone which may have been in part because the Pope himself was weary. That was one of my thoughts when the fatigue came over me at the start: what must the nearly 79-year-old Pope feel like? 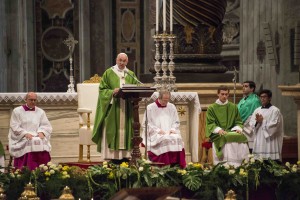 Pope Francis celebrating the final Mass of the Synod on the family. Photo by Fiona Basile.

A couple of bits of the homily especially hit the ear hard and reached deep. The Gospel of the day was the healing of blind beggar, Bartimaeus, from the Gospel of Mark, and here are the two paragraphs of the homily that stayed with me:

"There are some temptations for those who follow Jesus. The Gospel shows at least two of them. None of the disciples stopped, as Jesus did. They continued to walk, going on as if nothing were happening. If Bartimaeus was blind, they were deaf: his problem was not their problem. This can be a danger for us: in the face of constant problems, it is better to move on, instead of letting ourselves be bothered. In this way, just like the disciples, we are with Jesus but we do not think like him. We are in his group, but our hearts are not open. We lose wonder, gratitude and enthusiasm, and risk becoming habitually unmoved by grace. We are able to speak about him and work for him, but we live far from his heart, which is reaching out to those who are wounded. This is the temptation: a 'spirituality of illusion': we can walk through the deserts of humanity without seeing what is really there; instead, we see what we want to see. We are capable of developing views of the world, but we do not accept what the Lord places before our eyes. A faith that does not know how to root itself in the life of people remains arid and, rather than oases, creates other deserts.

"There is a second temptation, that of falling into a 'scheduled faith'. We are able to walk with the People of God, but we already have our schedule for the journey, where everything is listed: we know where to go and how long it will take; everyone must respect our rhythm and every problem is a bother. We run the risk of becoming the 'many' of the Gospel who lose patience and rebuke Bartimaeus. Just a short time before, they scolded the children (cf. 10:13) and now the blind beggar: whoever bothers us or is not of our stature is excluded. Jesus, on the other hand, wants to include, above all those kept on the fringes who are crying out to him. They, like Bartimaeus, have faith, because awareness of the need for salvation is the best way of encountering Jesus." 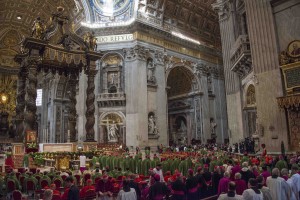 Listening to this, it was tempting to think that the Pope was playing the partisan game. But not so. To say that this applies to others and not to me is to mishear what Francis is saying and fall into the trap of seeing the Synod as no more than politics, a partisan play of power. The Pope's words applied to every one of us listening to him. The same was true of the words he spoke at the end of the Synod or at the celebration of the Synod's 50 years. This Pope is no ideologue; he loathes ideology. He has an acute political sense, but he doesn't play politics. He knows there are different convictions and positions, but he rises above the differences. 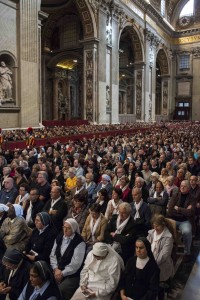 At times during the Synod I was struck by the apocalyptic vision of some of those most ardently opposed to any thought of Communion for the divorced and civilly remarried or a more humane and compassionate approach to homosexual people. For a few, the Synod seemed like Armageddon, the final battle between the sons of light and the sons of darkness. It was good versus evil, black versus white, all or nothing. No wonder they were anxious. Related to this is a view that I cited in an earlier post and which was heard at times in the Hall. It was an anxiety that we might see "the triumph of sociology over theology, history over metaphysics, the subjective over the objective and, fundamentally, becoming over being". The sense of antagonism expressed here is part of what I mean by an apocalyptic vision. It's one or the other; it couldn't be both. This ends up opposing, at least implicitly, truth and mercy, Church and world, the doctrinal and the pastoral. Yet this essentially pastoral Synod – a fact at times obscured – was surely about finding new convergences, not reinforcing old antagonisms. Of course there are antagonisms, but there's also "something greater than Solomon", which means the possibility of convergence beyond antagonism. That, I think, is the work of the Holy Spirit who, we kept saying, was the prime mover of the Synod and is the prime agent of evangelisation.

Did the Synod achieve much? Yes and no. The very fact that we voted to accept all 94 paragraphs of the final document was important, no matter that some of the votes were close. The Synod brought to the surface what had been submerged – that the pastors are not of one mind and heart on some of the deepest and most complex issues facing the Church. This might be considered a negative of the Synod, but I see it as a positive. An essentially pastoral approach has to start with the facts. It's no good living in some idealised Pollyanna world where all the bishops are supposed to be perfectly united, mind and heart. They aren't; and at least now we know that as we journey on together. We have a more realistic basis for what lies ahead as we explore more of what synodality means. We're living in the world that is, rather than the world as we might wish it to be. Yet our differences didn't amount to open warfare or lead to irretrievable breakdown. That's what the final voting showed and why it mattered. 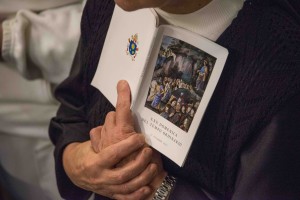 Member of the congregation with mass book
Photo by Fiona Basile

The final document isn't perfect nor does it provide pat answers to all the tough questions. It doesn't try to say everything about everything, as some seemed to think it should. But it's a vast improvement on the Synod working document, and it does provide the Pope with something he can work with. It's clear and compassionate, doctrinally sound and pastorally sensitive. There's a fair bit of Church-speak, but the document doesn't drown in it; and its preference is to speak positively rather than negatively, to affirm rather than condemn.

Some think that the fruits of this Synod process, reaching back to late 2013 when Pope Francis announced the two Synods, are meagre indeed, given the time, energy and resources that have been required. That sense of disappointment is tied, I think, to unrealistic expectation. As I look back now, I think we've achieved about as much as we could realistically have expected to achieve. We've certainly come to a deeper sense of the synodality of the whole Church – and both episcopal collegiality and the Petrine ministry within that context. That in itself may turn out to be the major achievement of this Synod process and what Pope Francis always had in mind.

As he has said and as we've all come to feel, the Synod journey is far from over; in some ways an important new phase is only beginning. But we are much better equipped for the new phase because of what's happened since late 2013. This doesn't mean we have a detailed road-map; but Abrahamic journeys never do. They require instead a listening of another and deeper kind. Through these weeks we've listened to each other; and at times that's been hard work. Part of the hard work has been resisting the temptation not to listen to certain voices or to listen only to those with whom one agrees. But if this Synod process has produced a (slightly or substantially) more listening Church, then it will have been worthwhile. 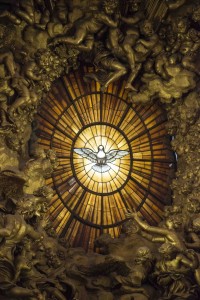 In these blog posts, I've spoken often enough of the moments of farce that punctuated the Synod. Looking back, they were more important than I thought at the time, when they seemed simply welcome distractions about which I could blog to give people a bit of a chuckle and a sense that the Synod wasn't all doom and gloom. Kierkegaard, I'm told, was a great aficionado of farce. He preferred its spontaneity, singularity and contingency to the ideal or universal aims of other dramatic forms admired by other critics. That may be why the Synod's farcical moments made such an impression on me and why I bothered recounting them to you. I've never thought of myself as a Kierkegaardian before this, but now I do ... a bit.

Today I pack my bags and look to another long journey – the haul from Rome back to Brisbane which takes most of a day. The blog has turned out to be a bigger thing than I expected; I thought it'd be just to keep a few folks back home in the picture. But it's been more than that. If it's helped others be part of the Synod, I'm glad. It's certainly helped me to focus my thoughts and feelings through the Synod and to maintain a sense that it wasn't just about us bishops in an upstairs room but about the whole Church. But now I return to the silence from which I came – and to Australia where we'll have to ask what all this means for us as the synodal journey continues. Thanks for your company.