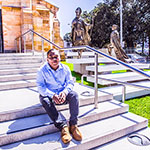 A violent altercation in the early hours of Easter Sunday in 2012 left Chris Lee blind in his left eye. The then 18-year-old was on a night out in Kings Cross, farewelling his roommate who was leaving to join the army (a path Chris had hoped to follow). The notorious nightclub precinct became the scene of a disturbing alcohol-fuelled assault against Chris by a complete stranger.

A fight broke out between the pair on William Street and the stranger pulled out a knife and stabbed Chris in the eye. The man proceeded to stomp on Chris’s head, leaving him to lie reeling in pain on the pavement. Chris was taken by ambulance to the same hospital where his father had died of cancer just two months earlier. As he lay in hospital, his army case officer called and explained the sobering reality that Chris’s lifelong dream of serving in the Australian Army was now impossible due to his partial blindness.

The harrowing experience had dealt yet another blow. The assailant has not been identified but this lack of closure hasn’t defeated Chris, rather he has chosen to focus on preventing others from experiencing similar attacks.

Chris is an Ambassador for both the Thomas Kelly Youth Foundation and the Wake Up Foundation. Thomas Kelly died in July 2012 after he was coward-punched by a man under the influence of alcohol. Both foundations aim to curb this type of violence. Chris has also co-founded Conviction Group, an organisation that provides mentoring services and forums for male students on mental health, drugs, body image, alcohol-fuelled violence, bullying and leadership. “I’d like to invite more young adult men to volunteer for the forums. When you’re asked to lead, you push yourself to heights you never thought you could reach,” Chris said.

It was a lot of self-reflection that helped Chris fulfill his call to lead. “I was in hospital for a month. I was very angry with myself and with the situation I had put myself in. There was a lot of regret there,” he said.

It was during his recovery that Chris realised he was being directed down a new path in life. “My eye doctor was treating the producer of the SBS forum-based television show, Insight, and I was asked to be a guest. We met others who had been involved in alcohol-fuelled violence. From there I was able to get in contact with the Kellys to become an Ambassador.”

Chris believes the timing of his attack was no coincidence. “What happened to me was too weird for it not to be saying, ‘Look Chris, you have been put in this position to take responsibility,’” he reflected.

Chris’s mother and sister are heavily involved in the parish life of St Patrick’s Cathedral in Parramatta. Chris believes it was their support that helped him through his recovery. It was their love and care that renewed his interest in his Catholic faith. “When I was 18 and before the attack I was questioning my faith. A lot of people blame God and push their faith away in those moments, but there were too many coincidences for it to not be a force pushing me to change my life,” he said. “I started going back to Mass and understanding my faith more. God’s impact in your life sometimes has to happen through weakness.”