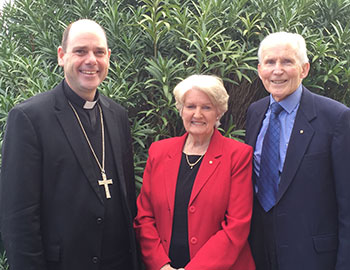 Bishop Kennedy, Bishop Delegate for Marriage & Family, will lead the Australian Pilgrimage to the World Meeting of Families with Mavis and Ron Pirola, Chair Couple of the Australian Catholic Marriage and Family Council.

From 22-27 September, thousands of families from around the world will gather in Philadelphia with Pope Francis for the eighth World Meeting of Families. Events such as this would have been frowned upon by the likes of Karl Marx and Fredreich Engels who advocated for the ‘abolition of the family’ in their 1848 Communist Manifesto. Thank goodness the family has not been abolished but is still going strong even if under huge pressures: economic, social, and moral. All families feel the strain of these pressures, some tragically so.

Aldoux Huxley imagined an inhumane futuristic one world state with no families in his 1932 novel Brave New World. In this imaginary world natural procreation has been abolished and all human life is produced through reproductive technologies; genetic engineering is used to breed workers of differing abilities in a strict caste system; embryos are raised in hatcheries; children are raised and educated, or rather indoctrinated, in large state-run nurseries; and euthanasia is compulsory. This vision has not become reality either, not yet anyway!

Whether it be an absolute communist vision of the world, Aldoux Huxley’s brave new world, or any other type of new world order, radical social change requires radical family change. That’s because families are the building block of society or as the Church prefers to say, families are the living cells of our society. When the cells are sick the body is sick; when the cells are healthy the body is healthy; and so it is for families and society. Saint John Paul II famously said: “As the family goes, so goes the nation and so goes the whole world in which we live”. In our own time, changes in marital and family life have certainly played a central role in the huge societal changes wrought by the Cultural Revolution since the 1960’s.

God’s beautiful design for families centres on a man and a woman falling in love, perhaps even breathtakingly so, as when Adam first saw Eve and had his breath taken away saying, if I may paraphrase “Ah, at last, this is the one! This is the one I will spend the rest of my life with, bone of my bones and flesh of my flesh”. The man and woman’s physical and personal differences attract and complement each other.

In God’s beautiful design the man and woman, either naturally or by adopting or fostering, can become a Mum and Dad. This family unit of mother, father, and children provides a sure and secure environment with a sense of belonging. The world can be a big and scary place, but the family provides the opportunity to experience unconditional love and merciful forgiveness; it provides the opportunity to learn human virtues and social responsibilities; and it creates a small domestic church, a community of faith and prayer united in and under God.

Whilst there are and always will be some exceptions, social research shows that stable family life based on intact marriage delivers the best outcomes for all: including longer and happier lives, better mental health, greater educational attainment, and increased productivity and income.

Jesus elevated marriage to a sacrament in which God unites husband and wife to each other in an unbreakable bond that no man or woman can divide bringing great benefit both to spouses and children. Through the sacrament God also gives married couples the grace they so surely need to lay down their lives for each other and for their children and to endure and triumph over whatever difficulties may come.

Jesus’ teachings on marriage, sexual desire and family life are truly beautiful, but they also make up some of those “hard sayings” for which the Scriptures tell us he faced opposition, even from many of his followers. In the face of opposition Jesus never changed his teachings, always choosing truth over popularity. But as well as being teacher we remember that Jesus is also healer. Yes, he had hard teachings, but he was also kind, merciful, and welcoming, and he knew that his hard teachings could only be accepted in faith.

The Church continues Jesus’ mission in the world, “Whoever listens to you listens to me” he told his disciples. So it should be no surprise that in our own day some Church teachings on marriage, sexual desire, and family life are also perceived as “hard sayings”.  The Church today in faithfulness to Jesus continues to teach his “hard sayings”, choosing truth over popularity while continuing to be kind, merciful, and welcoming.

Aware that families today face many great trials and pressures, the preparatory catechesis for the World Meeting of Families includes a chapter entitled “A Home for the Wounded Heart”. It recalls Pope Francis famously likening the Church to “a field hospital after battle” in which priority must be given to “healing peoples’ wounds”, “starting from the ground up.” The chapter goes on to say that marriage, human sexuality and family life are particularly vulnerable to so many wounds and that the Church is called to bring the “wounded” to an encounter with Jesus the Divine Healer. It says there is a challenge for all of us to see the Church’s “hard sayings” which are in fact Jesus’ “hard sayings” as words for our healing. Drawing upon the Parable of the Good Samaritan we need to rediscover Saint Augustine’s beautiful vision of the Church as the inn where the wounded traveller is taken to recover.

In God’s beautiful design man and woman come together as equal yet distinct “helpmates” in the great and challenging adventure of marriage, of forming a family and of building a fully human world, not a “brave new world”. May the Church’s mission of teaching and healing continue to assist families in this great God-given endeavour!