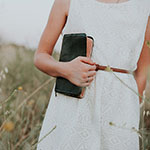 While Vatican II used the language of apostolate to describe broad participation in the mission of the church, in the years after the council, this language all but disappeared. In its place came ‘lay ministry’.