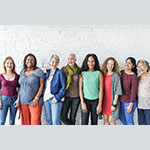 The research project Exploring Lay Pastoral Ministry in the Catholic Church (2016) took a case study approach in order to explore the great variety of ways and contexts in which lay pastoral ministry is exercised. The research covered those in both unpaid and paid positions. In order to ensure that case studies covered a wide range of situations, they were conducted in five States around Australia, in remote and rural areas, larger cities, and the capital cities, and in high, moderate and low multicultural contexts. They occurred in various canonical settings and involved in-depth semi-structured interviews with lay people in pastoral ministry, parish priests and moderators, a variety of people involved in the administration of parishes, diocesan representatives and other parishioners. In total, 94 people were interviewed.

The research is now available in full on the Australian Council for Lay Pastoral Ministry website. The following is an extract from the Executive Summary.

Most of those in lay pastoral ministry had grown up in the Catholic Church, although some said they had drifted away from the Church at one time or other. Many had taken on lay pastoral ministry because they recognised that there were too few priests to do all that was needed. Others saw it as a responsibility of being a Catholic and they were giving back to the communities which had nurtured them and witnessing to their faith in the community. In some cases, roles had developed over a long period of time, arising from the need for someone to take on a responsibility, or because it was felt there was no one else to do it. Some were paid and others were not, with no common rationale for determining whether remuneration was appropriate. While most found the roles rewarding, many experienced tensions in the expectations other parishioners and priests had of them and in prioritising their responsibilities for other aspects of family and work life. For many of them, there was an inherent insecurity in the work. A new priest arriving in the parish could mean that their roles would be terminated or significantly changed at short notice. Few felt there was a possibility of moving to similar roles in other parishes. While they could provide some continuity in parish life when priests were moved, there was little attention given to their own security or their succession.

While relationships with dioceses and the national Church were rarely problematic, there was evidence that many lay pastoral ministers were not aware of the support that might be available, and felt isolated in their particular contexts. It was acknowledged that the support of the bishop for lay pastoral ministry was crucial for its effectiveness.

In the light of these observations, and the evident changes in the levels of specialisation and development of 'expert systems' in Australian society, the following recommendations are made: