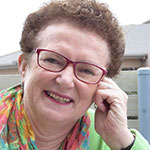 Andrea Dean grew up in the small gold mining village of Adelong on the south western slopes of New South Wales. After training as teacher she worked in various fields of education, mostly as a member of the Sisters of St Joseph, for more than 30 years.

Initially she taught and ministered in rural New South Wales and the Australian Capital Territory. A highlight was the time she spent living in Papua New Guinea where she worked in the Vanimo district from 1993 to 1996.

Eventually settling in Canberra, Andrea has been involved in leadership, facilitation and teaching through the Catholic Education Office, the Australian Catholic University and the University of Canberra. In 2004, she received a Churchill Fellowship and visited the USA to investigate programs in teacher formation. Since 2009, Andrea has worked as an independent consultant and life coach in her business which is called Future Matters. She offered retreats and spirituality days for Catholic schools and organizations as well as supporting the implementation of mentoring programs and collaborative development of Vision and Mission Statements.

Recently she been training as a spiritual director, coordinating a national Catholic leadership program for young women (the Young Catholic Women’s Interfaith Fellowship) and acting director of the Office for the Participation of Women within the Australian Catholic Bishops Conference.

Her new appointment is to the joint role of Director, Office for the Participation of Women and Director, Lay Pastoral Ministry. Andrea will support both the Council for Australian Women and the Australian Catholic Council for Lay Pastoral Women in advising the Bishops Commission for Church Ministry and implementing their strategic plans.

Andrea looks forward to getting to know more lay pastoral ministers in the weeks and months ahead.