Composer of Mass for the Fallen 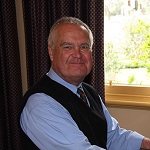 Sydney-born priest and composer Christopher Willcock was a student of composition under Peter Sculthorpe before joining the Jesuits in 1969. After studies in Paris he taught at the United Faculty of Theology, Melbourne, in the fields of sacraments and worship. He is now Professor Emeritus. He has released six collections of liturgical music with Oregon Catholic Press, and for the concert hall he has been commissioned by the Tasmanian Symphony Orchestra, the Tallis Scholars, the Melbourne Chamber Orchestra, among others. In 2014 three liturgical music commissions received their premières: a Missa Brevis, for Merton College, Oxford; and settings of the Mass for two Jesuit universities in the US: Mass of Saint Robert Bellarmine, and Mass in Honor of Pope Francis.

Commissioned by Allan and Maria Myers for use at the Eucharist on Anzac Day, Mass for the Fallen is a musical setting of several parts of the Mass: Kyrie Eleison, the acclamations during the Eucharistic prayer, and Agnus Dei. It is designed for communities with varying levels of resources, from the simplest where there is a congregation, a cantor, and a keyboard player, to the more generously resourced where there is also a choir. My brief was to compose a setting that could be sung and played by parishes and communities of average ability, and that could be learnt after a couple of hearings or rehearsals. A further consideration was that it be used not just in this year, 2015, the centenary of the Anzac landings, but on future Anzac Days and other days of remembrance as well. The music, therefore, had to have sufficient interest to encourage such repeated use.

In addition to the Mass parts, I have also composed a setting of the well-known verse from Laurence Binyon's poem, For the Fallen, whose title I have used for the whole collection. Binyon's verse begins, "They shall grow not old", and is set either for soprano solo, mixed choir, and keyboard, or, more simply, for unison voices and keyboard.

The opportunity I have been given to provide a musical expression for Anzac Day commemorating an event so significant in Australia history, is one that I hope will be shared by Catholic communities and others in this country. I salute Allan and Maria Myers for their initiative.

Commissioners of the Mass for the Fallen 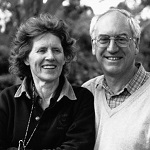 Allan Myers was born in Hamilton and educated by the Missionaries of the Sacred Heart at Monivae and then at Melbourne University where he resided at Newman College. He then attended Oxford University. Maria Myers was born in Melbourne and educated at Loreto, Toorak and Ballarat and at Melbourne University where she resided at Saint Mary's College. They have supported the arts in many ways particularly the National Gallery of Victoria, National Gallery of Australia, Museum and Art Gallery of the Northern Territory and the Australian String Quartet. Allan is a barrister. The family company, Dunkeld Pastoral Company Pty Ltd has pastoral and other interests in Victoria, Northern Territory and Western Australia. They have three children.

It seemed to my wife Maria and me fitting to mark the ANZAC Centenary by commissioning a Mass for the Fallen. As far as I knew, there was no Australian Mass for the Fallen. The Mass composed by Chris Willcock SJ, a great Australian composer, can be sung as part of the Catholic liturgy or as part of the liturgy of other Christian churches. It is our hope that it will also be used in concert performance. In every case, it will be a reminder of the sacrifice of those who died in war and a prayer for them that war may be avoided.